The sex-determining region Y (SRY)-related high mobility group (HMG) box (Sox) genes are characterized by their HMG domain, which mediates DNA binding and bending. Sry-related HMG box 13 (SOX13) is a member of the HMG box family of transcription factors. Sox13, together with Sox5 and Sox6, constitutes a class D subgroup of the Sox protein family and harbors two highly conserved functional domains. One is the family-specific HMG box DNA-binding domain, which is located in the C-terminal half of the protein, and the other is a group-specific coiled-coil domain (also called a leucine zipper motif) located in the N-terminal half of the proteins. The coiled-coil domain of SoxD proteins mediates both homodimerization and heterodimerization. Sox13 forms a homodimer through its leucine zipper motif, and this homodimerization reduces DNA binding. Sox5-Sox6 heterodimerization enhances the binding of these proteins to DNA and is then activated by Sox9 at the Col2a1 enhancer. Although very little is known about the function of SOX13, due to the importance of several family members in T cell development, SOX13 was identified as a candidate transcription factor that may be important for γδ T cell development. 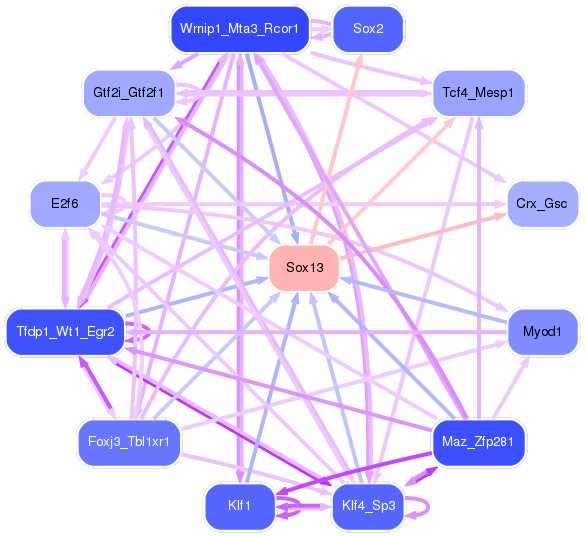 Sox13 is the first true γδ-lineage-specific TF identified that is necessary for normal γδ T cell development. The heterogeneous expression of Sox13 in TN2 cells, combined with the asymmetry in the developmental potential of the TN2 subset, indicates that some lineage separation had occurred before TCR rearrangement. The silencing of Sox13 expression may constitute an initial step in the elaboration of the αβ-lineage molecular program. Although this conclusion does not preclude the influence of possibly distinct γδ TCR and pre-TCR signaling modules in subsequently reinforcing or modifying the lineage-fate decision, the ability of SOX13 to antagonize TCF1 suggests that a simple on/off switch controlling the magnitude of Wnt/TCF1 signaling may be an early, critical regulator of the binary T cell fate decision process. 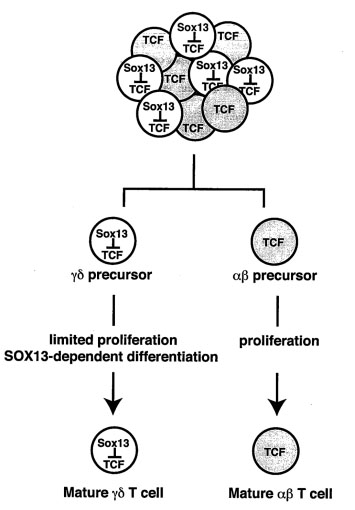 Transgenic mice overexpressing Sox13 are characterized by a lower abundance of αβ T lineage-committed CD4+CD8+ double-positive thymocytes, whereas γδ T cell development remains normal. In contrast, mice at embryonic day 18.5 that have targeted deletion of Sox13 are characterized by approximately 70% fewer total γδ thymocytes. Those Sox13-deficient mice are reported to have severe postnatal growth abnormalities that preclude the study of how Sox13 deficiency affects γδ T cell subsets in adult mice. Subsequently, developing γδ T17 cells were shown to have enrichment for Sox13, although whether Sox13 is required in vivo for their generation or function has not been reported.

In recent years, SOX13 has been found highly expressed in tumors, and cancer patients with a high SOX13 expression often have a poor survival prognosis, making it a potential tumor biomarker for diagnosis and treatment in the malignant tumors. There is also increasing evidence that γδ T cells participate in many diseases. Recent reports have shown close interaction between SOX13 and γδ T cells. However, we need further research to determine if the interaction of SOX13 and γδ T cells significant for cancers.