As a family of serine proteases, granzymes are expressed broadly by cytotoxic T lymphocytes and natural killer (NK) cells. They are components of the immune system that protect higher organisms against viral infection and cellular transformation. Typically, after receptor-mediated conjugate generation between a granzyme-containing cell and an infected or transformed target cell, granzymes enter the target cell through endocytosis and induce apoptosis.

Among a number of granzymes, granzyme B is the most powerful pro-apoptotic member. Cysteine proteases play a crucial role in apoptosis, enabling the cleavage of proteins after acidic residues, especially aspartic acid. Until now, granzymes have been well characterized only in human and rodents, and can be grouped into three subfamilies based on substrate specificity: (1) members of the granzyme family that have enzymatic activity similar to the serine protease chymotrypsin are encoded by a gene cluster termed the ‘chymase locus’; (2) granzymes with trypsin-like specificities are encoded by the ‘tryptase locus’; (3) and a third subfamily cleaves after unbranched hydrophobic residues, especially methionine, and is encoded by the ‘Met-ase locus’.

It is worth noting that all granzymes are synthesized as zymogens and, after clipping of the leader peptide, maximal enzymatic activity is achieved through the removal of an amino-terminal dipeptide. 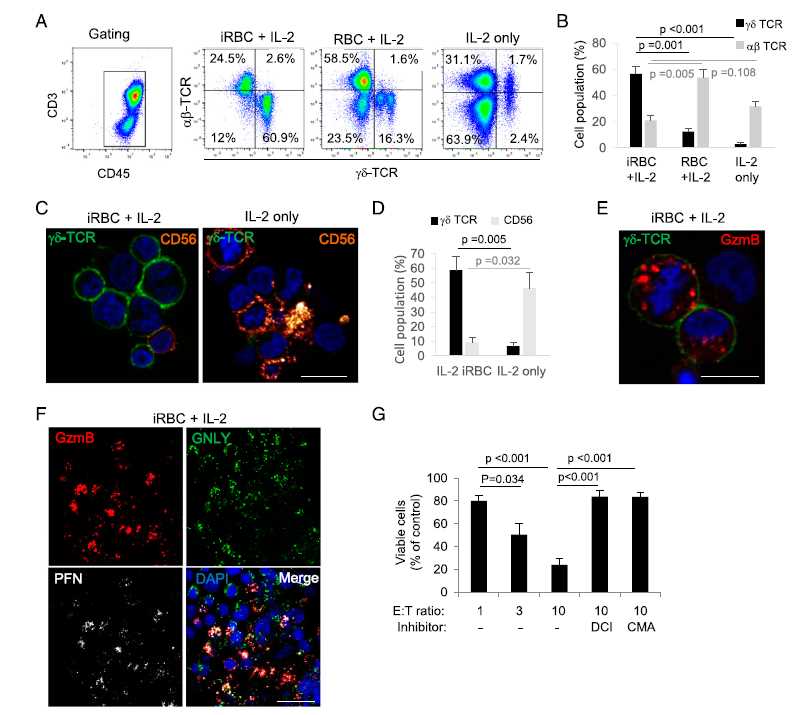 In a recent study, researchers found that γδ T cells, particularly gVd2 T cells, bind P. falciparum-infected RBCs to generate immune conjugates. Besides, it is also proven that the killer cells release Granzyme B (GzmB), which is transferred into the bound iRBCs, and the parasite viability is quickly reduced within these conjugates. The biological significance of this observation is supported by a variety of published lines of evidence:

Related research has revealed that incubation with GzmB in combination with PFN reduces the viability of both the early stages and late stages of the parasite. Besides, research data has shown a novel innate immune mechanism of how γδ T cells provide immune protection against blood-stage malaria via the specific binding to iRBCs to release the cytotoxic effector molecules GzmB and GNLY that subsequently efficiently kill the intracellular late-stage parasites.