Interleukin-22 (IL-22) is an important mediator for immune cells to transmit signals to tissues during inflammation and infection. Insights into this cytokine are provided from many aspects of immunology and microbiology.

IL-22 is a cytokine of the IL-10 family, which can be produced by T helper (Th) 17 cells, γδ T cells, natural killer T (NKT) cells, and the newly described innate lymphoid cells (ILCs). Since its discovery in 2000, the understanding of IL-22 biology has developed rapidly, and its role in many tissues has been confirmed, including the intestine, lung, liver, kidney, thymus, pancreas, and skin. IL-22 mainly targets non-hematopoietic epithelial and stromal cells, where it can promote proliferation and play a role in tissue regeneration. Besides, IL-22 regulates host defenses on the barrier surface. However, IL-22 is also associated with several diseases involving inflammatory histopathology. 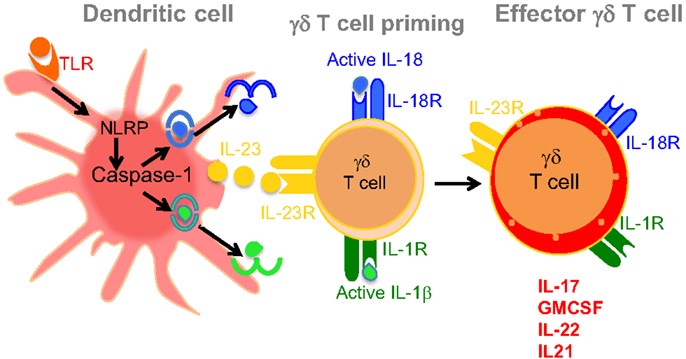 The IL-22 expressing γδ T cells has an important protective effect on pulmonary fibrosis. In vivo studies have shown that repeated stimulation of lung antigens can lead to collagen deposition and the development of fibrosis. Compared with the control group, the expression of IL-22 was significantly reduced. These data suggest that IL-22 plays a protective role in the development of fibrosis.

IL-22 expressing γδ T cells also play a key role in mucosal barrier defense. Since the human Vγ9Vδ2 T cells are abundant in the gut and can recognize the metabolites related to the microbiota, studies have evaluated their potential to induce IL-22 expression through intestinal CD4⁺ T cells. The results showed that the response of CD4⁺ T cells stimulated by human γδ T antigen-presenting cell (APC) was different from that induced by myeloid APCs, which promoted local barrier defense by releasing IL-22 and calprotectin through the membrane. Targeting the function of γδ T-APC may lead to the development of new immunotherapies and vaccines for the gut.

Fig.2 Schematic of IL-22 as a key regulator of the interaction of the microbiota with the intestinal epithelium. (Parks, 2016)

Microbial malnutrition is a common feature of AD. In particular, the colonization and infection of Staphylococcus aureus (S. aureus) are widespread in the skin of AD patients and can aggravate the skin inflammation of AD. Studies have shown that IL-22-expressing γδ T cells have a protective effect in limiting the growth of S. aureus on mechanically damaged skin in mice. IL-22 induces antimicrobial peptide (AMP) gene expression, attracts neutrophil chemotactic factors, neutrophil infiltration, and epidermal thickening may all contribute to this protective effect.

We have learned a lot about IL-22, especially in the past 10 years, but there are still many gaps in our knowledge. Therefore, it is necessary to further study the biology of IL-22, which will undoubtedly contribute to a better understanding of many chronic inflammatory diseases and the potential therapies for cytokines.