Surgery is the only way to cure liver cancer, and only early liver cancer has such a chance. However, because most patients with liver cancer have liver cirrhosis, or most of the patients have reached the middle and advanced stages at the time of diagnosis, about only 20%-30% of patients will eventually get the chance of surgical resection. In addition to surgery, local treatment methods include hepatic artery embolization chemotherapy, percutaneous radiofrequency ablation therapy, radiotherapy, etc.; systemic treatment includes chemotherapy, targeted therapy, and immunotherapy. Among them, immune cell therapy seems powerful to fight against cancer cells to achieve anti-tumor effects. The immune cell therapy currently approved and used in clinical includes: dendritic cell vaccine therapy, αβ T cell therapy, γδ T cell therapy, NK cell therapy, etc.

There are different types of immune cells, and their methods of recognizing cancer cell antigens and signals are also different. γδ T cells can directly identify the signals of cancer cells and launch an attack immediately.

T cell-based immunotherapy is becoming a major trend in cancer treatment. In particular, CAR-T cells, which are genetically modified T cells, have shown a significant remission rate in patients who have not responded to many other drugs. Nevertheless, CAR-T still has its limitations, such as strong and sometimes fatal side effects, and its ability to target solid tumors is also limited. Among the various solutions, there is a type of research that focuses on a specific subtype of T cells, called γδ T cells. These cells account for only 5% of all T cells in the human body, but they play an important role in fighting cancer.

Different from αβ T cells that are usually used to prepare CAR-T therapy, γδ T cells play a role in the innate immune response, which constitutes the first and faster line of defense of the immune system.

Another major advantage of γδ T cells is that their ability to recognize antigens does not depend on the existence of a specific major histocompatibility complex (MHC). MHC is a molecule on the surface of cells that presents antigens to white blood cells. MHC varies from individual to individual and is the basis of donor compatibility in transplantation. In contrast to αβ T cells, γδ T cells can recognize antigens independently of MHC. This makes them a great candidate for the development of "off-the-shelf" that originate from donors rather than patients, and this approach can make treatment faster and more economical.

Taking the patient's immune function into account, Professor Yin's team used allogeneic γδ T cell therapy in liver cancer. The occurrence and development of tumors are due to the long-term suppression of the body's immune system, and cancer cells evade immune surveillance. The immune cell function of tumor patients has been greatly destroyed, so allogeneic from healthy people γδ T cells have more advantages than autologous γδ T cells. At the same time, the γδ T cell receptor is not MHC restricted. The γδ T cells from normal donors expanded in vitro will not target normal host cells after being reinfused into the patient to avoid the occurrence of graft-versus-host disease (GVHD). Allogeneic γδ T cells do not require genetic modification, no cytokine storm, no off-target effects, and lower cost than other cell treatments, which makes them the best choice for allogeneic "off the shelf" therapy. Professor Yin's team has developed a new γδ T cell culture formula, which enables γδ T cells to expand in vitro quickly, with high purity, long survival time, and strong anti-apoptotic ability.

Professor Yin’s team reported a Hungarian enrolled patient, male, 30 years old, engineer, hepatocholangiocarcinoma stage IV, and abdominal lymph node metastasis. This patient was enrolled in August 2017 and the trial ended in February 2018. During this period, only γδ T cell therapy was performed. After 8 γδ T cell reinfusion treatments, MRI showed that the metastatic lymph nodes were significantly reduced, suggesting that as the number of cell treatments increases, the lymph nodes are gradually cleared by γδ T cells. The test results during the treatment showed that the patient had no liver damage and the tumor markers were maintained at a low level, suggesting that γδ T cell therapy is safe for the patient. While receiving γδ T cell therapy, the patient used flow cytometry to detect the changes in peripheral blood immune function. It was found that the patient’s naïve CD4 T cells and central memory T cells increased after treatment, indicating that γδ T cells can directly kill the tumor while also conditioning improves the patient’s immune function. 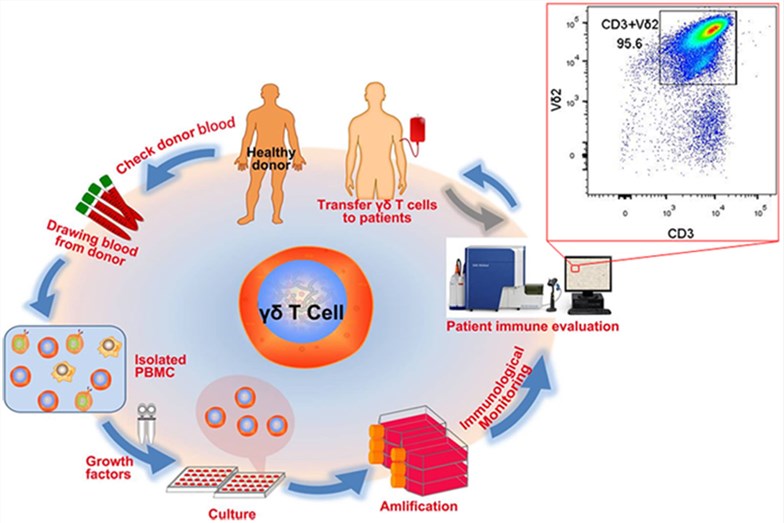 γδ T cell therapy has shown promising results in the treatment of liver cancer, but the therapy is still in its early stage. The efficacy and safety of γδ T cell therapy need to be fully investigated in the future. If you have any problems on the way of developing γδ T cell therapy, please directly contact us, Creative Biolabs will provide you with a full range of services, including but not limited to: