Endothelial protein C receptor (EPCR), also referred to as activated protein C receptor, is a transmembrane glycoprotein that binds to and activates protein C, a critical factor in human anticoagulation. In structure, EPCR is a member of the major histocompatibility class 1/CD1 family, exhibiting homologous similarity in both sequence and 3-dimensional structure to CD1d protein. EPCR contains a tightly bound phospholipid, usually phosphatidylcholine, in the deep groove, which is responsible for the binding to protein C.

The discovery of EPCR was dated back to 1994, which was originally identified as a specific expression on the surface of endothelial cells of large vessels. Later research found that EPCR was also expressed on the surface of other endothelial cells, some tumor cells, and immune cells (mainly monocytes and neutrophils). The widely distributed EPCR is capable of reacting with a range of ligands and receptors, such as protein C, human factor X, Mac1 on leukocytes, Plasmodium falciparum erythrocyte membrane protein I, γδ T-cell receptor (TCR), etc., exerting a great important role in the immunity regulation, anti-inflammation, malaria pathogenesis, as well as cancer development and prevention. 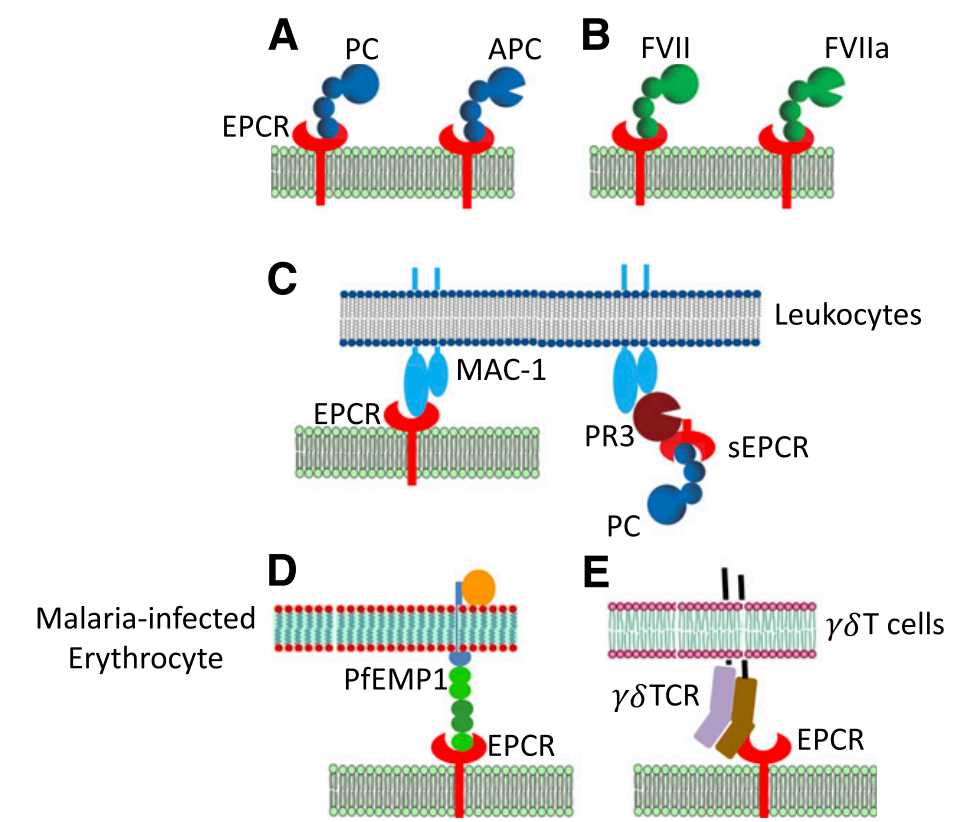 Cellular immunity mediated by T lymphocytes respond to a broad variety of foreign pathogens and transformed cells, playing an important role in immune defense, pathogen clearance, and immune surveillance. T lymphocytes are broadly grouped into αβ T cells and γδ T cells based on the expression of the surface T-cell receptor (TCR). γδ T cells, a small subset of T cells accounting for <5% of the total T lymphocytes, express characterized γδ-TCRs that can recognize a variety of ligands to induce an array of cellular immune responses.

It has been shown by Willcox et al. that EPCR served as a stress-regulated ligand binding to and activating the γδ T cells in response to infections or tumors. The TCR on the surface of human Vγ4Vδ5 T cell clone could directly recognize and bind to EPCR in an antibody-like and lipid-independent way, by which Vγ4Vδ5 T cells recognized and targeted cytomegalovirus-infected endothelial cells and epithelial tumor cells. Research conducted by Ramirez et al. has indicated that the γδ TCR reaction with EPCR might be implicated in skin wound healing. Normally, the expression of EPCR is remarkably up-regulated in keratinocytes near the wound and providing a stress signal of damage or disease to proximal dendritic epidermal T cells in the epidermis. Dendritic epidermal γδ T cells carrying a Vγ43Vδ1 TCR in epithelial tissues directly recognize and bind to EPCR to mediate the wound healing. Thus, the EPCR-γδ TCR reaction might be a potential target or solution for the wound healing, viral infection treatment, and tumor immune surveillance in the future.