CD1 family of antigen-presenting proteins have evolved into specific lipid antigens and presented to T cells, which has attracted more and more attention.

The protein folding properties of classical MHC molecules have shown significant practicability because the CD1 family members of MHC molecules have evolved to use this holistic structure to bind and present lipid antigens to T cells. Human CD1 family consists of five members, CD1a-e, which can be divided into three groups: group 1 (CD1a-c), group 2 (CD1d), and group 3 (CD1e). Because of the extensive variability of self-, microbial- and environmental-derived lipids in polar head groups, the hydrophobic binding pockets of CD1 molecules are suitable for binding and presenting a wide range of lipid reserves through nonspecific interactions with hydrophobic lipid tails. In fact, different members of the CD1 family have unique binding vesicles that together hold 20 to 80 carbon lipid tails.

Fig.1 Schematic representation of the binding pockets from the different CD1 molecules. (Pereira, 2016)

According to the usage of Vδ gene fragment, two main populations of human γδ T cells are classified as Vδ2 and Vδ1. Vδ1 T cells have been shown to recognize several different molecules of the non-classical MHC family with or without antigens. The uniform characteristics of these Vδ1 ligands are their self-derived origin and stress-regulated expression, indicating that Vδ1 T cells may have intrinsic self-reactivity. CD1d, a member of the CD1 family, has been identified as a Vδ1 ligand by several independent research groups and has also shown that it can stimulate Vδ3 cells, thus highlighting its universal importance as a "non-Vδ2" γδ T cell ligand. CD1d is also the only γδ TCR ligand identified in human and mouse systems, which further indicates that some of the γδ TCR may have evolved to sample specific lipid antigen libraries. 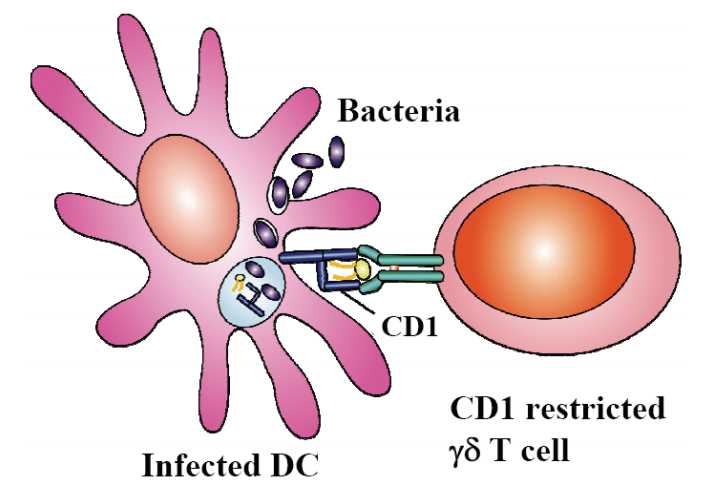 The functional relevance of “regulatory activity” by CD1-restricted γδ T cells is not only because they produce cytokines after stimulating lipid stimulation, but also because they can lyse cellular targets expressing CD1c and CD1d isomers. Risk signals can up-regulate these molecules on the surface of microbial infected cells, stress mucosal epithelial cells, transformed tumor cells, or APCs carrying autologous phospholipids (PLs), thus emphasizing the role of CD1-restricted γδ T cells in immune surveillance.

The Antigen Recognition of CD1 in Allergy

Studies have shown that the data from human and mouse seem to indicate that the correlation of mucosal associated γδ T cells in allergen recognition and airway inflammation may be mediated by the interaction between exogenous antigens and CD1⁺ dendritic cells (DC). Studies have also shown that CD1⁺ immature DCs expand in the respiratory mucosa of allergic subjects and can process proteins and lipids at the same time, while CD1-restricted PL-specific γδ T cells are the key mucosal regulatory subsets that control the host's early response to tree pollen. These CD1 restricted γδ T cells can rapidly respond to lipid antigen recognition by secreting a large number of cytokines (including a large amount of IL-4) and expand in the site of mucosal allergic inflammation.