Divided by the T-cell receptor (TCR) expressed on the cell surface, T lymphocytes are generally categorized into αβ T cells and γδ T cells. The human γδ T cell is a minor population of T lymphocytes carrying a distinctive γδ T-cell receptor (γδ-TCR). Although only accounting for ~5% of the total T cells, γδ T cells play an important function in both innate and adaptive immune responses.

The featured γδ-TCR expressed by γδ T cell is a membrane-anchored heterodimeric protein composed of two variable peptide chains: γ chain and δ chain, together with the cluster of differentiation 3 (CD3), forming the TCR complex to mediate signal transduction. The γ chain and δ chain are linked by a disulfide bond, each of which can be divided into a variable (V) region away from the membrane and a constant (C) region near the membrane. The complementarity-determining regions (CDRs) locate at the top of the γ chain and δ chain, providing a highly variable antigen-binding domain, which plays a decisive role in antigen recognition and effector functions of γδ T cell. 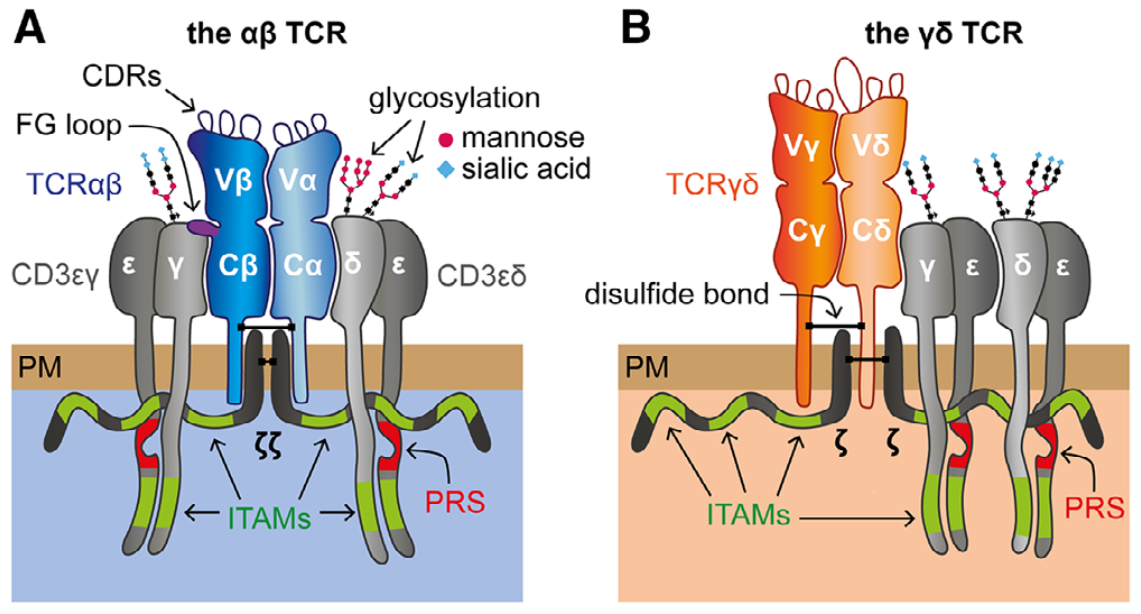 The γ chain and δ chain that make up the γδ-TCR are encoded by the multiple variable (V), diversity (D, only inδ chain), and joining (J) gene segments. The diversity of γδ-TCR is rightly determined by the ordered V(D)J-recombination. Four human γδ T cell populations, there are about 4-6 Vγ and 8 Vδ gene segments, among which Vδ1, Vδ2, Vδ3, and Vγ2, Vγ3, Vγ4, Vγ5, Vγ8, Vγ9, and Vγ11 are the most frequently gene segments used in the γδ-TCR rearrangement. The different TCR γ chains combining with δ chains forms featured γδ-TCRs defining different γδ T cell subtypes, such as Vγ9Vδ2 T cells expressing the TCR rearranged by a Vγ9 chain and a Vδ2 chain, and account for the majority of peripheral blood γδT cells. 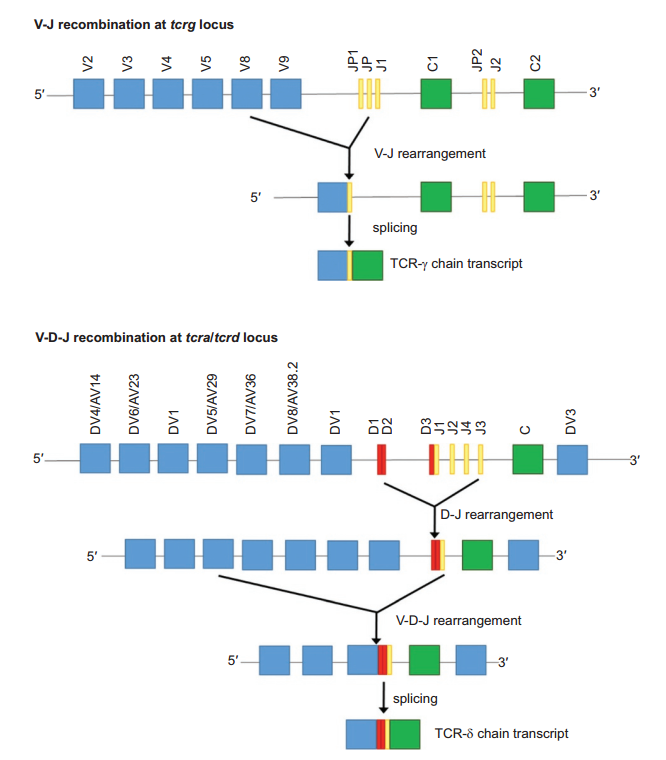 With a structure similar to immunoglobulin, γδ-TCR can recognize and respond to a variety of self- and nonself- molecules. Compared with the large quantity of identified ligands recognized by αβ T cells, currently confirmed ligands for human γδ TCR are relatively scarce. Importantly, γδ TCR-mediated recognition is an unrestricted major histocompatibility complex (MHC), which is completely different from αβ T cells. The targets or antigens recognized by γδ-TCR mainly encompass but are not limited to phosphoantigens, MHC molecules, CD1 family molecules, soluble proteins, and many other structures. By binding to these targets, γδ T cells are activated and induce a diversity of biological functions, exerting a fundamental effect in immune defense and surveillance. 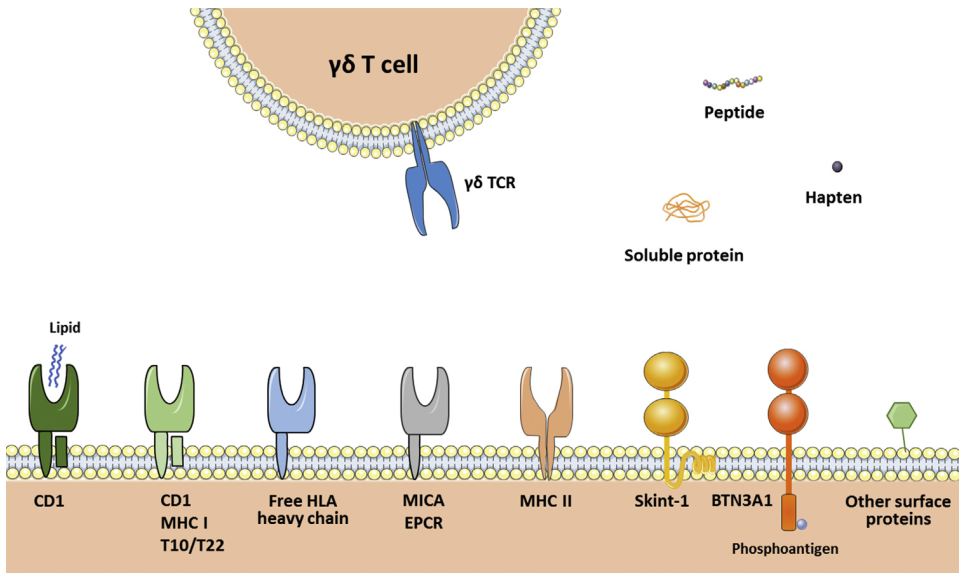 In humans, γδ T cells arise in the thymus from the fetal age, maintaining throughout lifetime after birth and closely involving human health and diseases. Early in gestation, both Vδ1+ and Vδ2+ TCRs, dominantly Vδ2+ TCRs, can be detected in the fetal blood. After birthing in the thymus, immature γδ T cells with Vδ1+ TCRs are the most abundant, which subsequently leave the thymus to differentiate into effector γδ T cells in the periphery. In healthy adults, circulating Vγ9Vδ2+ T cells dominate, whereas, when challenged by environmental stimuli Vδ1+ T cells rapidly expand. Additionally, these γδ T cells with specific γδ-TCR distributed in different tissues are not identical. The γδ TCR repertoire composition on the surface of γδ T cells is representative of a healthy or diseased state. Currently, γδ TCR repertoire analysis has been widely applied for the exploration and elaboration of the relationship between the γδ T cell and human diseases. 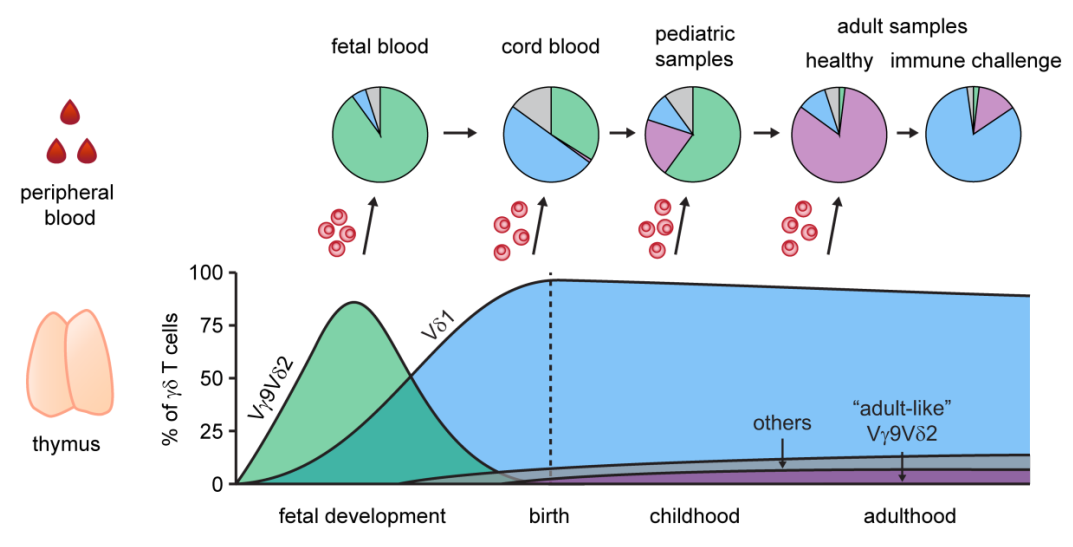