Toll-like receptors (TLRs) expression was initially detected in innate immune cells and epithelial cells where they mediate immune responses upon infection. In recent years, it has been observed that TLR expression is not restricted to the innate immune system. TLR was detected in B cells as well as in T cells and their subpopulations. Recent studies identified TLR expression in γδ T cells possibly playing an important role in early immune responses of γδ T cells against different pathogens.

TLRs were the first mammalian pattern-recognition receptors (PRR) to be cloned. They are the most well-characterized PRRs and subjects of considerable investigation. TLRs include 10 functional subtypes in humans (TLR1 10), of which TLR1, 2, 4, 5, 6, and 10 are expressed on the cell membrane, and TLR3, 7, 8, and 9 are located on the endosomal membrane. The differential subcellular localizations of these homologous TLRs largely correlate with the types of molecular patterns they recognize. Several studies have indicated that UNC93B1, a 12-pass transmembrane (TM) chaperone protein, mediates trafficking of TLR3, 5, 7, and 9 from the endoplasmic reticulum to the endolysosome membrane through direct interaction with TLRs or by recruiting an adaptor protein complex 2 (AP2). The innate immune system, governed by TLRs, performs a defensive role that contributes to the survival of the host by promptly neutralizing external or internal threats.

γδ T cells and toll-like receptors (TLR) serve as an important link between the innate and adaptive immune responses.

The results with human γδ T cells demonstrate that TLR ligands on their own (except for TLR5 ligand flagellin) are not sufficient to exert a striking effect on γδ T cells. A co-stimulatory effect is induced in freshly isolated human γδ T cells after combined TCR- and TLR1/ 2/6, -3, or -5 ligand stimulation. However, in γδ T cell lines and clones, the addition of exogenous IL-2 (necessary for the expansion of γδ T cells) might overcome the co-stimulatory effects of TLR ligands. Besides, TLR8 ligands abolish the suppressive function of tumor-infiltrating Vd1 γδ T cells, and several other TLR ligands induce an indirect effect via DC or tumor cells on γδ T cell effector functions. 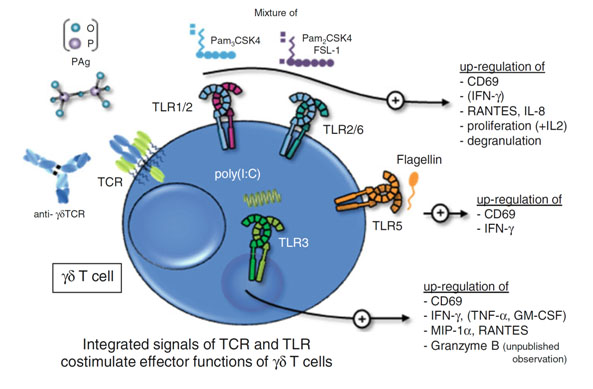 Studies have demonstrated the protective role of γδ T cells in infection and inflammation. Activated γδ T cells through TLR3 and TLR4 ligands rescue the repressed maturation of virus-infected DCs and mount a potent antiviral response. Malarial infection in MyD88 deficient mice resultes in impairment in CD27-IL-17A-producing γδ T cell without affecting the IFN-γ producing γδ T cells. This study specifies the role of TLR in promoting the proliferation of proinflammatory γδ T cells. Another study showes that IL17 producing γδ T cells express TLR1 and TLR2 and expand in response to their ligands and mount an adequate response against heat-killed M. tuberculosis or C. Albicans infection. 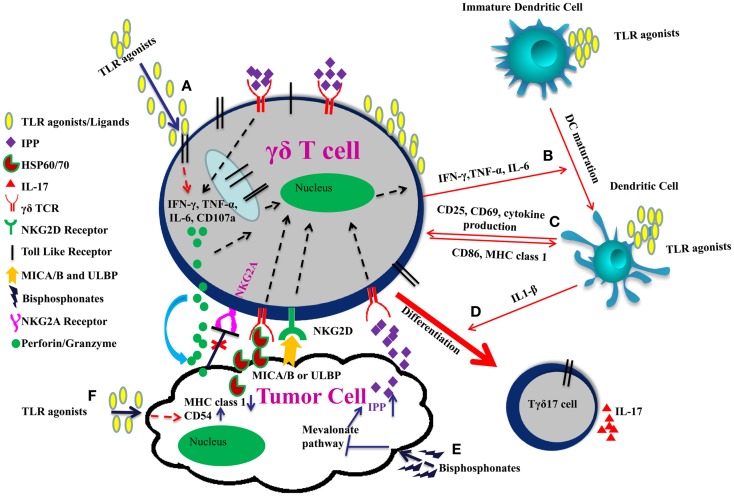 TLR ligands can modulate the effector functions of γδ T cells. The combined TCR-TLR ligand stimulation of γδ T cells (directly or indirectly) could be a strategy to optimize Th1-mediated immune responses as an adjuvant in vaccines against viruses or bacteria or could help to improve the therapeutic potential of cancer vaccines.

Please feel free to contact us for more information.